skip to main | skip to sidebar

Got my mofro workin' 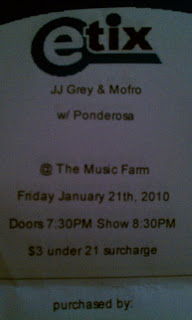 So, I just bought tickets to a show for 1.21.11. The picture is evidence of what happened when I printed the tix. My letter to e-tix is as follows;

Hello,
I recently purchased tickets for a concert to be held on January 21st, 2011. What I received was tickets for January 21th, 2010. I was just wondering if a time machine was included in the total cost, as I am afraid I have yet to purchase one of my own. I debated on whether or not to comment on the fact that the 21st of a month should be referred to as such, but I figured you were too busy mailing out time machines to notice the error.

Oh man, news stories in this state are awesome. Here's another one - I'll treat you to the lead in sentence..
A naked South Carolina man who had a mouse lodged in his rectum was arrested Saturday evening after he allegedly burglarized a home and later attacked officers responding to a call about the break-in.
Sometimes you just have to laugh to keep from crying...amirite?
Posted by KC at Tuesday, November 09, 2010 3 comments:

Email ThisBlogThis!Share to TwitterShare to FacebookShare to Pinterest
Labels: The South

Wow, so it’s been a while huh? It’s been a crazy couple years or so since I’ve been here last. Shall we do the recap? When I last left off here, I was a little heartbroken and desperately seeking a replacement roommate.
I ended up finding not only a roomie, but a pretty incredible friend. Her name is Stina – she’s pretty awesome. Say Hi Stina. 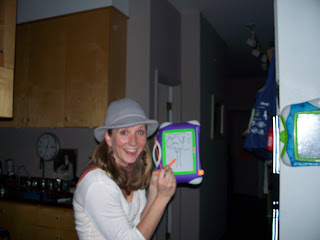 Stina and I had many nights that looked like this… 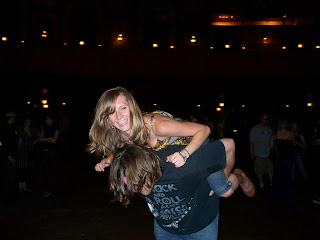 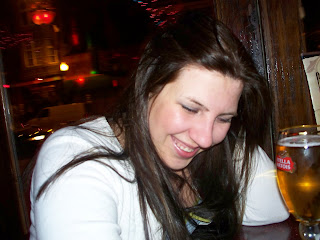 You get the idea. It was therapudic and since Stina was also coming off a rough breakup, it was exactly what the two of us needed.

Sometime last summer, my friend Chip decided to throw a dinner party at my apartment. This is Chip. Say Hi Chip. 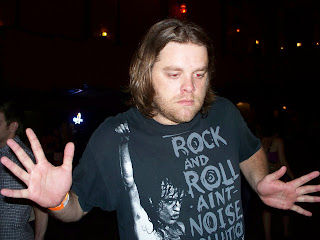 Chip brought along his friend Josh, who happened to be the drummer in his band, The Emerald Lizards (now defunct). This is Josh. Say Hello Josh. 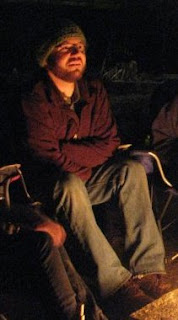 Josh and I ended up staying up all night drinking beers and talking about our favorite music. There was a little bit of flirting.

We all had some more crazy times. 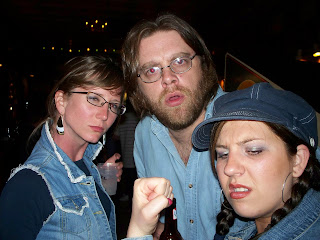 Josh and I vacationed together in Mexico. 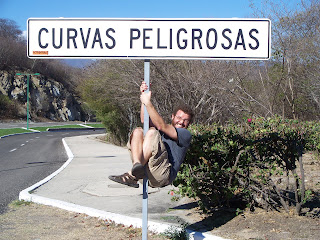 Josh went on a business trip to the Czech Republic. 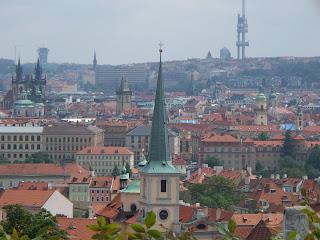 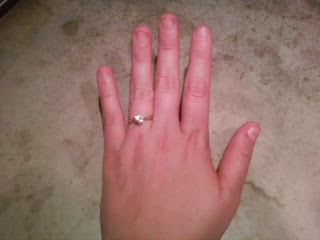 And now we are moving to Charleston, SC with his job.

As I write this update, I am sitting on a tiny plane traveling out to the South East coast of these United States. We are going to go look for a house…with a yard…within a short drive to the ocean while still being relatively close to his job. I’m still not sure what I will do for money once we move out there, but I’m hopeful.

This weekend marks my 10 year High School reunion and, boy, does that make me feel old as hell.

All in all, while I wouldn’t call High School the “best years of my life,” I had a hell of a great time and look back with mostly fond memories. Despite the warm fuzzies, my initial feelings about a reunion were mixed. With the advent of Social networking and whatnot, I really didn’t see a need to attend a reunion. Besides, as far as I can tell, ours was organized via Facebook anyway. I could find anyone that might be attending on Facebook – if I was that curious about their life.

The reunion was scheduled at a sports bar in St. Charles and two hours of well drinks and some pizza/bar apps were included in the $30/ticket package. I looked over the details and began to weigh my options…my thoughts went like this…

A. Wow…$30 seems like a lot for well drinks and bar food in the ‘burbs. I could see a concert with that money.
B. Ugh. I don’t really like that bar.
C. I don’t have any family left in St. Charles, so I would have to find somewhere to crash or get a hotel room.
D. Holy crap, is it really $30/person?
E. Meh, fuck it. Not going.

My decision was made. It would probably be fun to see some people, but overall, I was mostly uninterested. Not a biggie. Besides, I’d have to have someone watch my dog, and frankly, I figured a 15 or 20 year reunion would be more interesting anyway. It wasn’t that I disliked anyone that would be attending or organizing the event. Actually, quite the opposite. Those people are good people, it just wasn’t my thing.

Next thing I knew, I started seeing Facebook status updates and e-mails asking me if I would be attending the “Rebel Reunion.” Turns out, some other folks from my High School graduating class decided to throw their own party, on the same night, here in Chicago. One of the organizers owns and runs an art gallery and donated his space for the event. They were offering a four hour premium open bar with finger foods for half the price. My mind again weighed the options…

A. $15 is reasonable and I can bring the boyfriend for only $5 more. Nice.
B. I love art galleries.
C. OMG I can WALK there. If it’s lame I can WALK home.
D. Ohhh, I bet people will turn this into a thing.

Turns out, people did, indeed, turn this into a thing.

Pleading messages started to appear on discussion boards. “Why does it have to be the same night? Why can’t we all just get along?” I found these messages to be a bit strange. Why does it have to be the same night? Because, otherwise, it wouldn’t be an alternative reunion, it would just be another reunion…and people would still find a reason to be mad about it. While I recognized that some people might think that the Rebel Reunion was divisive, I looked at it differently. It simply provided an option for those who would not be attending the “official” reunion. Besides, I find it difficult to believe that the Rebel Reunion crew is poaching potential attendees of the official event.

In addition to the pleas for cohesiveness, I have also recently spotted status updates to the tune of “The Rebel Reunioners support Bin Ladin,” “The original reunion has better people going” or “The Rebel Reunion is for losers.” Really, people? Really? While these antics are all very amusing to watch from my desk chair, I am left to wonder how much we have really grown in the last 10 years. I’m also wondering if this sort of thing is precisely what attendees of the Rebel Reunion are trying to avoid.

I don’t think the organizers of the Rebel Reunion had the initial intention of upsetting anyone or rocking the boat. I also don’t think they planned their reunion with the intent to be disrespectful or cruel to the organizers of the other. I think they just wanted to attend a different kind of event. At the same time, I think they are smart enough folks to know that some people would take it the wrong way and the event might not be well received by everyone. I can’t speak for them, but I’d be willing to bet that they are ok with that.

As for me, I am looking at the Rebel Reunion as more of a party or gathering than a reunion & I actually think it will be pretty cool to attend a party in the owned gallery space of a fellow graduate. Besides, I can WALK home and that rules.
Posted by KC at Friday, November 06, 2009 2 comments:

Don't say I never made you cry

Email ThisBlogThis!Share to TwitterShare to FacebookShare to Pinterest
Labels: advertising 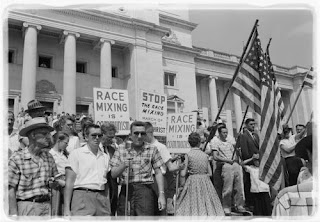 Warning: This could get graphic
Tonight, I begin a journey.
Tonight, I start a cleanse.
Apparently, I have been drinking the hippy juice (Becky - pretend to look surprised) and decided that I need to detox my body. For years now, I have been filling my self with nasty, horrible, bad-for-me food. I quit smoking and took up stress eating. While I will never smoke again, I'm not sure this was a good trade. For this reason, I am back on the diet train. Choo choo baby.
I have been really thinking about making some big changes, but that's just it... it's only thinking. I need less philosophy and more action. After some thought, I decided to appraoch this new phase of dieting much the same way I approached quitting smoking back in 2007. At first, it's going to be hard. I will need to find other ways to handle the stress, other things will make me feel better when I am feeling down. I figure that maybe what I need a little jump start to this whole diet thing. This is where the cleanse comes in.
I have been hearing a lot about how amazing a cleanse can make a person feel. Apparently, the first several days are pretty terrible, but the physical payoff is amazing. Apparently, I will rid my body from a backup of years full of toxic sludge. That's right, folks. Some gross stuff is gonna come out of me.
This is what I am doing... 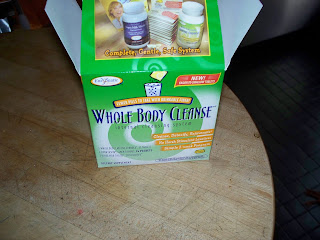 It's a Whole Body Cleanse! 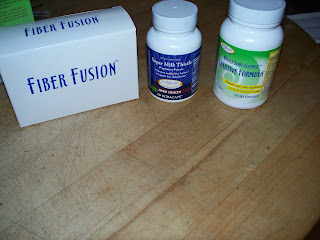 What is "Fiber Fusion?" and What's that on the right? Does that say "Laxative Formula?!?" Holy Shit (pun intended)...what am I doing? 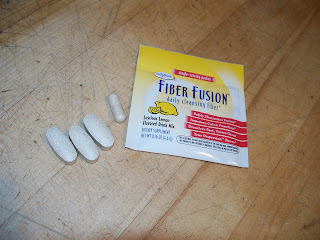 KC
I used to live in Chicago. Now I live in South Carolina. Things are just a little different here.

I am a twit